Skip to content
Hi, I’m Rachel and I live in Los Angeles. I run Swipe Out Hunger, a nonprofit a few friends and I founded while we were angsty students at UCLA.

I grew up in the San Fernando Valley just outside of Los Angeles. My parents immigrated to the US from Iran and I’m pretty proud of my Iranian Jewish American heritage. Aside from being able to both speak and write in the language, I can cook you a mean khoresht sabzi.

After I graduated from UCLA I had that millennial urge to to change the world so I moved to Chicago and spent the year helping people who were homeless get back on their feet. That year I lived in a 16 person bad-ass co-op. I love Chicago (and the Cubs).

I stepped into my future as an entrepreneur in September of 2013 when I moved back home. I and walked into a Starbucks, took at seat and welcomed myself into my first day on the job as CEO. You can read about that and my reflection on my first two years here.  Wrote something much shorter for my three year. While I’m proud of the million meals we’ve served, what fills me with optimism is thinking about the tens of thousands of  student who have donated their meal swipes. Since, I’ve been featured in The New York Times and on Forbes 2017 30 Under 30 List.

Growing up, people told me “you’re not a very typical Persian girl.” I think they said this because I spent my spring breaks working on Skid Row or building schools in Nigaragua which isn’t very common among Persian girls in LA. Over the years I’ve decided I didn’t like that this phrase “typical” limited what Persian girls were allowed to do. So I’m on a mission to reclaim it.

you can support swipe out hunger here. 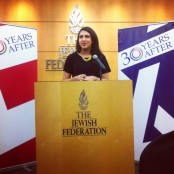